As much as he loved cars, Elvis Presley never had a ride like “Blue Suede Shoes,” a one-of-a-kind 1959 Buick Invicta Custom Coupe set to cross the auction block with No Reserve during the 2022 Barrett-Jackson Scottsdale Auction, January 22-30, at Westworld in Scottsdale.

“Blue Suede Shoes” is a no-expenses-spared, full-on custom build that pays stylistic homage to a bygone era of American car styling. It even starred on an episode of MotorTrend TV’s “Bitchin’ Rides.”

The creation of acclaimed builder Kindig-It Designs, “Blue Suede Shoes” cost well into the six-figures to build, according to the consignor, the end result of 18 months and 13,000 man-hours of superb craftsmanship. Every part and piece of this big-finned Buick has been modified and massaged to create an award-winning custom build.

The Buick has drawn attention and acclaim everywhere it has been, including multiple SEMA Show appearances. Its list of awards truly is impressive: Top 5 Hot August Nights; Top 12 Finalist Good-guys Custom of the Year; Multiple Goodguys Builders Choice Awards; Best in Show Kool Deadwood Nights; Best in Show Counts Car Show; Top 5 Dickinson Car Show; and many other Best in Show or Best in Class accolades. There wasn’t a show entered that an award wasn’t received.

Like the classic Elvis song this car was named for, this Buick coupe is a true icon of the fabulous fifties, and the 1959 model year saw tailfins reach unprecedented heights. The massive rear fins are in place and its classic lines and rich chrome trim are accentuated with exterior modifications, including a cast-molded custom grille, tucked bumpers that pull into the body and door handles built into the side trim. One-off EVOD wheels with wide whites built into them complete the look.

The tune continues under the hood. Power comes from a General Motors supercharged 6.2-liter LSA V8 engine that’s been tastefully tweaked with custom finishings to match the curvatures of the hood, and detailing reminiscent of the original Buick Nailhead engine that would have been standard in 1959. Putting the power to the rear wheels is a GM 4L80E automatic transmission.

Rest assured the Buick’s beauty is not just skin deep. The underside of “Blue Suede Shoes” is as detailed and sophisticated as its power plant, thanks to a custom Art Morrison chassis with coilover shocks, tubular independent front suspension and a 4-link rear suspension. In combination with a set of power-assisted Wilwood disc brakes, the top-grade components ensure that this beefy Buick handles and stops as well as it accelerates.

According to the consignor, this beautiful build is properly sorted out for enjoying on the road, having already completed two road tours. 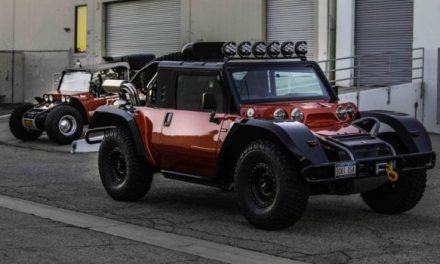