To say the anticipation for the new Bronco was palpable would be an understatement. Since the last Ford Bronco rolled off its Wayne, Michigan, assembly line 25 years ago, the absence left by Ford’s premier off-roader has been duly noted by Blue Oval fans and off-road enthusiasts. In what could easily be hailed as one of the most hotly anticipated new car releases in well over a decade, the Ford Bronco is back and better than ever.

At the 2021 Barrett-Jackson Scottsdale Auction history was made with the sale of VIN 001 of the all-new 2021 Ford Bronco. Selling for $1.075 million with 100 percent of the hammer price benefiting the National Forest Foundation and Outward Bound, the VIN 001 Bronco captured aficionados of the bucking stallion everywhere. Barrett-Jackson Chairman and CEO Craig Jackson was among them. “Seeing the all-new Bronco under the lights on our auction block was truly something special.” Jackson said. “I’m very grateful to Ford for supplying VIN 001 of the new Bronco and was so excited by the sale that I had to get one myself.”

Owner of a custom 1977 Ford Bronco himself, Jackson is no stranger to Ford’s toughest off-roader and welcomed the chance to purchase VIN 004 of the 2021 Bronco. With VIN 001 sold for charity and VINs 002 and 003 going to members of the Ford family, VIN 004 is an extra-special Bronco as it represents the first one sold to the general public. “I am truly thankful to our friends at Ford for affording me this incredible opportunity.” Jackson said. The Bronco is the fourth of only 7,000 total First Editions to be built for the 2021 model year and its Rapid Red paint exterior color matches that of Jackson’s 2020 Shelby GT500.

Continuing in the style of its ancestors, the Bronco wonderfully merges form and function; easily capable of tackling the suburban sprawl or conquering the back 40 with aplomb. Ford touted the Bronco’s off-road chops as being “built with the toughness of an F-Series and performance spirit of a Mustang.” The Bronco is powered 310hp twin-turbo 2.7-liter V6 with 410 ft/lbs of torque and routes power through a 10-speed automatic transmission. The aptly named “Sasquatch Package” comes standard on the First Edition and pairs Big Foot-esque 35-inch Goodyear Territory mud terrain tires with 17-inch beadlock wheels. 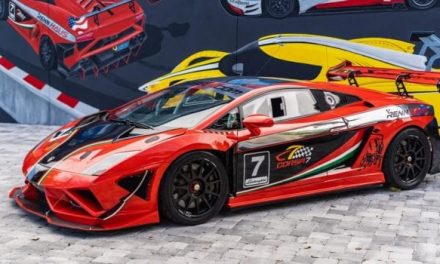