This exquisite full-size transportation-themed carousel manufactured by Wilhelm Hennecke of Germany in 1957 sold for $557,750 at the 2018 Scottsdale Auction.

Automobilia is just as much a part of the Barrett-Jackson experience as the collector cars that cross the block. The neon lights and porcelain signs of yesteryear add to motoring history and nostalgia. It’s an all-encompassing experience and one that makes the collector car hobby so appealing to so many. At the start of each Barrett-Jackson event, the finest and rarest one-of-a-kind automotive collectibles take center stage.

Part of the Ron Pratte Collection, this Harley-Davidson neon sign from the 1930s brought in $86,250 at the 2015 Scottsdale Auction.

The World’s Greatest Collector Car Auctions has routinely shattered record after record of automobilia sales. Shattering all expectations and landing Barrett-Jackson’s flagship Scottsdale Auction once again in the record books, 2015 was a monumental year. With 2,000 rare automobilia pieces selling for $6.55 million – nearly triple the previous record – the 2015 Scottsdale Auction became the highest-grossing automobilia auction in history. Many of the top 10 automobilia items were from the renowned Ron Pratte Collection. Top sellers included a 1930s Harley-Davidson neon porcelain dealership sign that sold for $86,250 and a 1950s Humble Esso Aviation Products neon porcelain sign at $80,500.

Also out of the Ron Pratte Collection, this Humble Esso Aviation Products neon sign sold for $80,500 in 2015.

“We hit it out of the park with our Automobilia Auction in 2015,” said Craig Jackson, chairman and CEO of Barrett-Jackson. “It’s exciting to set new world records for automobilia sales. I believe it not only punctuates the strength of the collector car market, but also reinforces the confidence and faith that collectors have in Barrett-Jackson.”

The 2018 Scottsdale Auction would also be a monumental event for automobilia sales. History was made when bidding reached a fever pitch on Super Saturday, resulting in the sale of a full-size 1957 Wilhelm Hennecke transportation-themed carousel for an astounding $557,750.

The hot streak would continue with the sale of an extremely rare 1939 Husky Gasoline service station sign for an incredible $149,500 – setting a new world record for a 30-inch double-sided porcelain sign.

And lightning does strike twice: at the 2019 Scottsdale event, a second Hennecke carousel brought in an impressive $506,000. The momentum continued to climb and, in 2021, a total of 1,018 automobilia pieces sold at No Reserve for more than $4.4 million in Scottsdale – making it the second most successful automobilia auction in its 20-year history.

While collector cars may be the heartbeat of Barrett-Jackson, the always-colorful auction of authentic automobilia items has really added another exciting dimension to the company’s unique automotive lifestyle events over the past half-century. 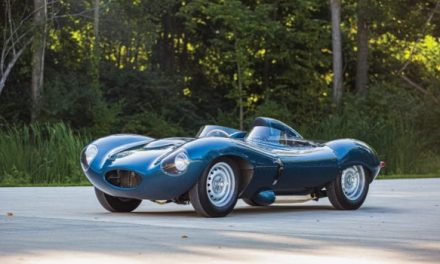