Robosaurus ready to chow down at the 2008 Scottsdale Auction.

Leading that list is a 40-foot-tall, 31-ton mechanical dinosaur that transforms from a 48-foot semi-trailer into a fire-breathing, car-crunching Tyrannosaurus rex.

Robosaurus, created by inventor Doug Malewicki in 1989, was probably the most talked-about offering at the 2008 Scottsdale Auction, where – to the delight of event attendees – it put on a display of its capabilities, its stainless-steel teeth ripping into a vehicle with 20,000 pounds of crushing force as 20-foot flames shot from its giant nostrils.

“Robosaurus was one of my favorites,” remembers Barrett-Jackson President Steve Davis. “When it was consigned, that was a first in the industry – there was no collector car auction that even consigned anything like that!”

Powered by a 500-horsepower turbocharged Cummins diesel engine, the mechanical monster is operated by a driver that sits in the head, manipulating its claws through the use of four hydraulic pumps. Two 20-gallon propane tanks produce the fire-breathing effect, and air cannons within the robotic beast can fire confetti, fireworks or missiles.

The new owner brought Robosaurus along to the 2008 Las Vegas Auction to entertain attendees.

Bidding on the marvel of engineering was fast and furious in the auction arena (while Robosaurus itself patiently waited off to the side, too large to fit even on the massive Barrett-Jackson stage). When the gavel fell, the giant metal robot went home with a Las Vegas businessman for $632,500.

In October that year, the winning bidder brought Robosaurus along to kick off Barrett-Jackson’s very first Las Vegas Auction by leading a parade of auction vehicles down the Strip – which wasn’t without incident. The mechanical behemoth had a minor altercation with a streetlight and decided to take a break directly in front of the Four Seasons driveway – but all ended well and Robosaurus proceeded to put on some impressive car-chomping exhibitions just outside the auction site at Mandalay Bay.

Suffice it to say you never know what to expect at a Barrett-Jackson auction – even a giant transforming dinosaur robot! 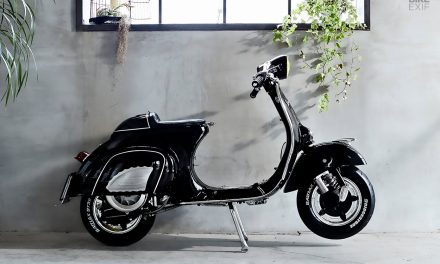